Skip to main content
God is working His purpose out 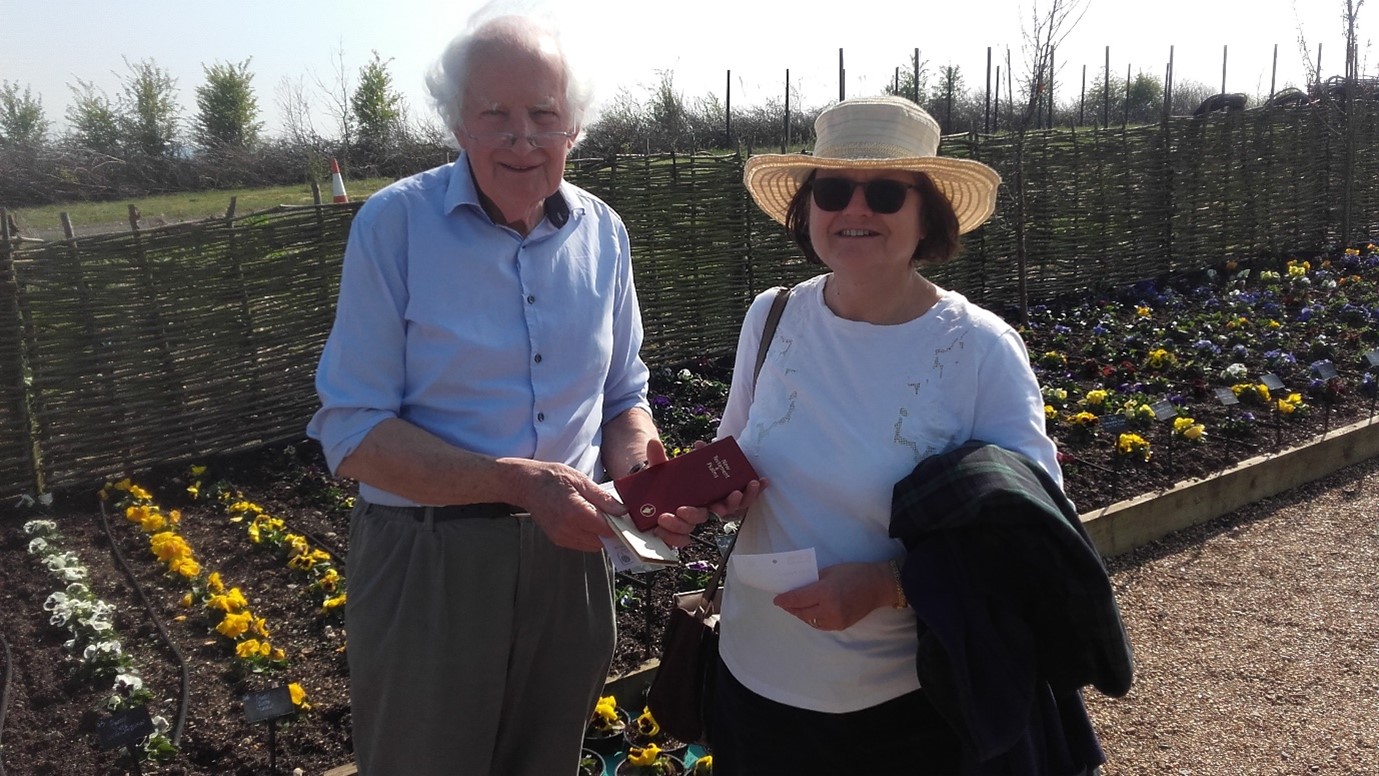 God is working His purpose out

Whether it is an answer to prayer over many years or a chance meeting, the Lord continues to present opportunities to place and present copies of His precious Word. Read on to see what we mean and be encouraged!

It's taken over four years to bring Cumbria Constabulary Testaments to fruition. I was pleased to hand them over to Allison Lee, of the Cumbria Christian Police Association, at last. When they arrived, and I sent her a photo of them, she replied: “Oh wow! Thank you so much this is amazing. I am just bowled over. Thank you again, you kept pushing me when I got disheartened with my colleagues' lack of input so thank you very much. Now going to find a hanky and have a good weep and give thanks.” (Glenys Braithwaite)

Rodney and Priscilla Eborn were enjoying the wonderful summer-like weather sitting on a bench in the beautiful Flora and Fauna Garden of RHS Hyde Hall, Chelmsford Essex, when an elderly man with a clipboard approached them.

“Would you mind completing my questionnaire?”, he asked. We noticed at the top of the questionnaire was The Sun newspaper logo. Both our minds were boggling. “I would be grateful if you could select your first and second choices for The Sun sponsored display of a variety of row after row of a beautiful display of pansies”.

We both agreed and made our selections, then entered into a general discussion with him about gardening. He shared that his name was Peter Seabrook and had been the Gardening Editor for The Sun for many years. He had lost his wife, Margaret, to coronavirus after 60 years of marriage. He mentioned that when life gets tough, he finds solace in his gardening and enjoying the birdsong and the flowers.

We shared that Priscilla had lost her mother, also called Margaret, in March 2021. This was an opportunity to share with Peter Seabrook that we had found God’s Word an inspiration when life gets tough. We presented him with a Personal Worker Testament, which he gladly received. He said he still had his Bible presented to him when he was at Sunday School!

Please pray that this seed of the Word of God presented will grow and take root!

Editors note: Peter Seabrook was called home in January 2022.  We pray that he found comfort in God’s Word since receiving it from Rodney and Priscilla.

I received a request for a Bible from National Office and, when I followed the enquiry up, an interesting chain of events unfolded with the gentleman concerned.
We met on the doorstep of his home, socially distanced of course, and I spent almost half an hour with him providing him with a Personal Worker Testament, a Bible, and a HOPE magazine for him and his wife. He is a prison officer and night shift warder at a local prison.

He explained that, currently, life in the prison is very disturbing with the normal prison in-take as well as young offenders locked in their cells for most of the day. Covid is rife in the prison with around half of those being offered the vaccine refusing. Prisoners wreck their cells in anger, and when able to, cause whatever trouble they can, as well as spitting at various people, warders included. So he talks to them and does whatever he can to help them and to calm them down.
He was talking to his Line Manager about “having a faith” in these challenging times and she, a Roman Catholic, suggested he looked a little deeper. He remembered being presented with a New Testament at his school in Devizes, Wiltshire, which led him to getting in touch with National Office. I explained about our work and connection with the prison chaplaincy. I have promised to pray for this gentleman, his wife, his job, and the prison staff and in-mates.
It’s good to be reminded that even in extreme circumstances, God is in the midst. (Tony Bruun, Wiltshire North West Branch)

Out with the bins

I am scared sometimes of offering a Testament to people. Just a few weeks ago after I had received a box of Key Worker Testaments I was aware that the binmen were working up our street. This was an opportunity to thank these Key Workers who had worked so tirelessly throughout Coronavirus times. (Do you ever pray for your binmen’s safety? They literally work in the road amongst traffic all the time!) I thought, “I will do it next week”, but then realised it would be a different crew as it would be the recycling team.

A quick arrow prayer and eight Key Worker Testaments in hand I rushed out into the road. One binman politely ushered me on as he returned a bin to the pavement – here was my first opportunity. I said I wanted thank them for working through as Key Workers and tell them that I really appreciate the work they continue to do. I offered a Testament and he quickly accepted.

Then his colleague came across the street and asked for his copy! I decided to go up to the driver, he gladly accepted the six remaining Testaments and said he would put some in the office when he returned to the depot. I said I would check with him that they had enough in two weeks’ time.
The following week the recycling guys were happy to accept and then in weeks three and four, I gave more to the relevant drivers for their office workers. The total now is around 24 Key Worker Testaments placed.

It really is worthwhile stepping out for God isn’t it? He enables us and strengthens us. (Chris Axelby, Region 3 Director and member of Doncaster Branch)

And it is not only in this country that we see the Word of the Lord going out! Here’s a report from the Share Word Global team in Chile.
The volunteers of Generation of Faith Church, based in Santiago, Chile, had a glorious time sharing the Gospel through the Esperanza magazine at the Clinical Hospital, Doctor Eloiza Diaz, in Santiago. Despite these difficult days of Covid, the volunteers were now given open doors and could preach and pray for the hospital occupants.

This was a very emotional time – after two years of restrictions they could now go in again with the power of the Gospel. And the life of a woman named Ximena was forever changed because of it.

Ximena Caris was behind a door doing her work at the hospital. She is part of the cleaning staff. So when the volunteers approached her, she was shocked. "I'm the kind of person people usually overlook; they don't see me as important," Ximena confided in the volunteers.

The team asked if she wanted them to pray for her, and in that moment, she opened her heart. Ximena shared that her family was crumbling apart. Her brothers had tried to take their lives a few days ago, and she wondered why Covid had not taken her. Her life seemed to have no meaning. But God had something different planned for her.

Ximena finally received Jesus as her Lord and Saviour. Tears filled her eyes as she cried, this time tears of hope not of pain. At last she knew God's love, she understood that God has a purpose and hope for her life.